On 9th August 2017, the Telecom Regulatory Authority of India (TRAI) released a consultation paper on Privacy, Security, and Ownership of the Data in the Telecom Sector (Consultation Paper) as a step towards developing a robust data protection framework to safeguard consumer interest.

In a twelve (12) part series of posts, we will map the opinions of all the stakeholders on each question on the basis of their responses to the Consultation Paper.

Are the data protection requirements currently applicable to all the players in the ecosystem in India sufficient to protect the interests of telecom subscribers? What are the additional measures, if any, that need to be considered in this regard?

Broadly, stakeholders fell into one of four categories: 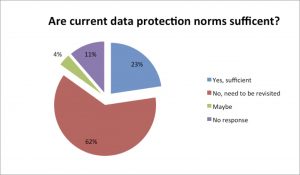 Graph illustrating the breakdown of responses

Stakeholders that gave no response to this question

Responses Mapped in the Table

The following table was prepared after an analysis of all fifty-three (53) responses to the Consultation Paper. The table identifies the stances of the stakeholders, dividing them according to where they stand on the sufficiency of the current data protection norms, and it also states the suggestions they have made to the TRAI for the evolution of a framework for the telecom sector in view of the question posed.

[This post is authored by Nehaa Chaudhari and Pushan Dwivedi with valuable contributions from Savyasachi, Shubhi, Adyasha and Lokesh, during their internships with TRA].

* The response did not give either a yes or no answer, but provided suggestions.

** The stakeholder chose not to respond to this particular question.