Intermediary Liability: Evolution of Safe-Harbour Law in India (Part I)

Intermediary Liability: Evolution of Safe-Harbour Law in India (Part I)

This is a quick guide to the evolution of safe harbour provisions under Indian Law and how proposed amendments are likely to impact them.

If you wish to skip the history of safe harbour provisions under Indian Law and want to learn about the the current safe harbour framework, please see our visual guide here.

If you are well-versed with existing framework and want to learn about proposed changes to the safe harbour framework, you can jump straight to our assessment of the likely impact of the proposed amendments, available here.

Safe Harbour provisions for intermediaries in India are found under the Information Technology Act, 2000 (“IT Act”) and its corresponding rules. The Safe Harbour rules have evolved considerably since their enactment, partly through amendments of the underlying act and rules, and partly through the way in which these provisions are interpreted by the Court.

Through these articles we will be mapping the course of this evolution and highlighting the benefits and pitfalls we see in the existing and proposed Safe Harbour provisions.

This article traces the development of the statutory law. Part II of this series will focus on judicial interpretation of safe harbour provisions in India.

In its original form, the IT Act provided little to no Safe Harbour protection to internet intermediaries.

For starters the definition of intermediaries[1] was restricted only to those entities who on behalf of another person receives, stores or transmits any electronic message or provides any service with respect to that message.

Even the intermediaries who qualified within this narrow definition were shielded only with respect to offences defined under the IT Act and not any other law[2].

These limited provisions provided little to no protection to an online intermediary. These shortcomings were highlighted in 2004 when a CD containing an obscene clip was posted[3] for sale by a user on the online auction site bazee.com. As a result of this, both the user, Mr. Ravi Raj and the CEO of bazee.com, Mr. Avnish Bajaj, were arrested and charged with the same offence. This case highlighted the lacuna in law, whereby an intermediary could be exposed to liability on account material it did not generate but only provided a platform to publish/circulate. The possibility of such liability threatened the growth of the e-commerce ecosystem. Accordingly, the Information Technology (Amendment) Act, 2008[4] was introduced which, amongst others broadened the scope of Safe Harbour Protection available to intermediaries.

The current framework for safe-harbour protection in India is illustrated in the flow-chart below. 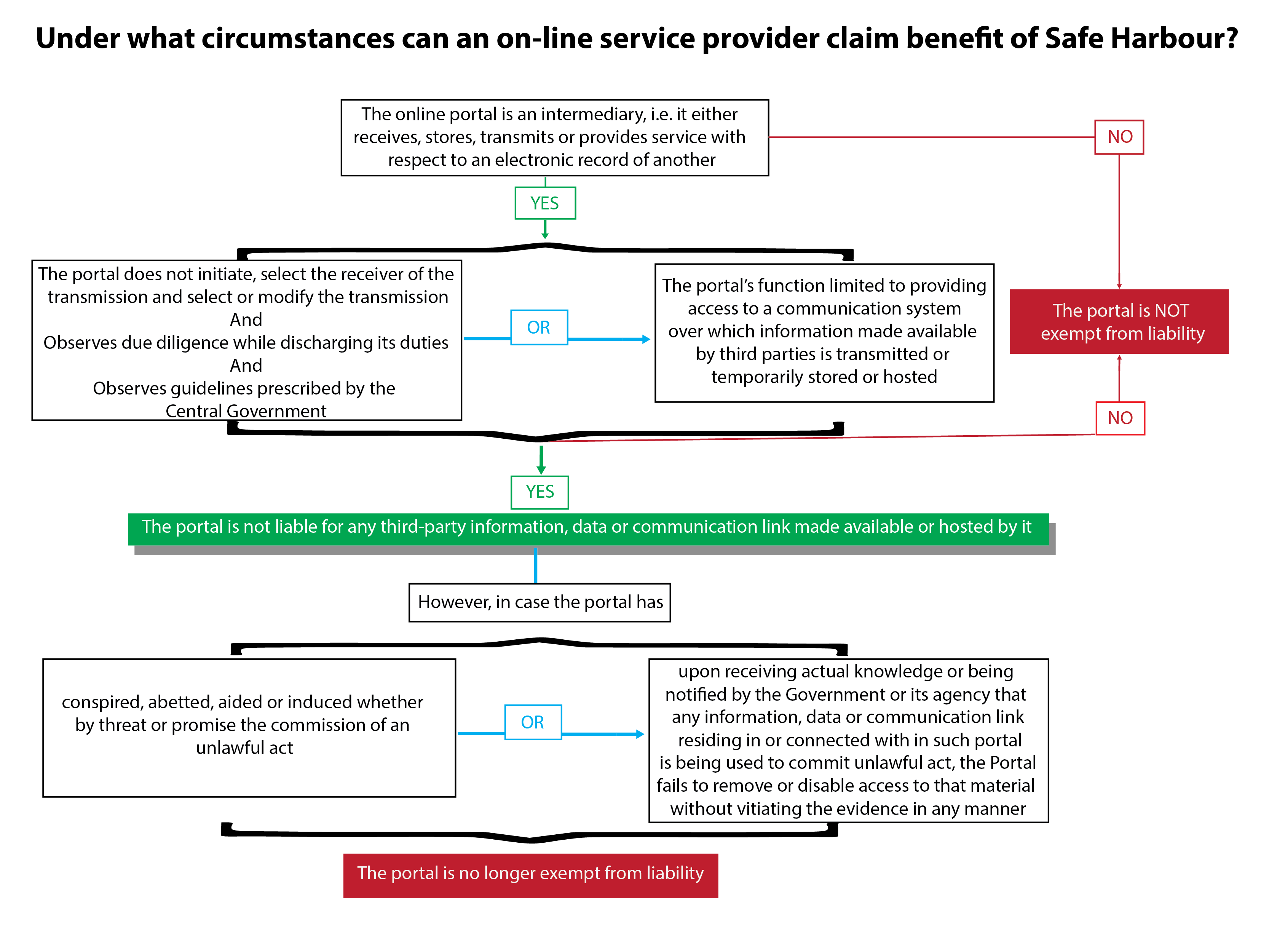 The proposed amendments to the Safe Harbour provisions amend the Intermediary Guidelines alone and do not change any provision of the IT Act itself. Nevertheless, they impose far reaching onerous provisions which an intermediary must comply with to claim Safe Harbour protection. These have been summarised and contrasted with the corresponding earlier requirements below-

[1] Previous text of Section 2(w) of the IT Act was :- “(w) “intermediary”, with respect to any particular electronic message, means any person who on behalf of another person receives, stores or transmits that message or provides any service with respect to that message;”

[2] Previous text of Section 79 of the IT Act was was :- “Section79 : Network service providers not to be liable in certain cases:- For the removal of doubts, it is hereby declared that no person providing any service as a network service provider shall be liable under this Act, rules or regulations made thereunder for any third party information or data made available by him if he proves that the offence or contravention was committed without his knowledge or that he had exercised all due diligence to prevent the commission of such offence or contravention.

Explanation.—For the purposes of this section,—

(b) “third party information” means any information dealt with by a network service provider in his capacity as an intermediary.”

[11] In Sabu Mathew George v. Union of India, (2017) 7 SCC 657, it was submitted by the respondent intermediaries that content which violated the PCPNDT Act could be removed only upon being brought to their notice. Even such limited blocking has not seen much success; Legally India, Roundup of Sabu Mathew George vs. Union of India: Intermediary liability and the ‘doctrine of auto-block’, available at https://www.legallyindia.com/views/entry/roundup-of-sabu-mathew-george-vs-union-of-india-intermediary-liability-and-the-doctrine-of-auto-block.