On 23rd October, 2019 the Delhi High Court passed a judgement on whether content take-down and blocking orders passed by it would be global in nature or would they be limited to operating in the territory of India. The court concluded that for content which was uploaded from India, they could direct global takedowns and for content uploaded outside of India, they can stop it from being accessed in India. This is a troubling precedent which complicates the compliance requirements for internet intermediaries operating in India. Critically, it raises the question in the title of this piece, has the court effectively asked intermediaries to track user location data?

The litigation stems from a defamation suit that Baba Ramdev and Patanjali had filed against the book ‘Godman to Tycoon – the untold story of Baba Ramdev’. An order of injunction was passed against the author and publisher of the book restraining them from distributing the book without deleting certain offending portions. This order had been appealed in the Supreme Court, but its operation had not been stayed. In the meantime, certain videos which summarised the injuncted portions of the book were circulated on social media platforms like Facebook, YouTube and Twitter. Baba Ramdev and Patanjali approached the High Court to direct these platforms to takedown these videos. On 24th January, 2019 the court directed the platforms to block access to the videos in India. It kept open the issue of whether the videos should be blocked globally.

Arguments put forth by the platforms

The platforms argued that defamation laws differ from jurisdiction to jurisdiction and therefore a global blocking order would result in a conflict of laws situation and go against the principle of comity of courts. They argued that free speech standards vary across the world and if national courts are allowed to pass global injunctions, the standard would be reduced to the “lowest common denominator”. They reasoned that the injuncted book is itself available internationally and therefore the injunction on the videos should be restricted to India. They argued that they had already geo-blocked the content for the Indian territory and that the mere apprehension that the content could be accessed through VPNs and proxy servers did not justify a global injunction order.

How do these platforms determine where content has been uploaded?

The court specifically asked the platforms to explain how they go about geo-blocking content. Facebook’s position was that it relies on different data points including the user’s IP address, self-reported location of the user and GPS location data from user smartphones to determine the user’s location and accordingly geo-block content. According to the court, Google and YouTube’s position was that content which is against their terms of service and community guidelines was blocked globally. Twitter blocks content on the receipt of court orders on the basis of the country of residence found in the account settings of the user’s profile, which in turn is automatically determined by the IP address used at the time of account creation. If any content is against their terms of service, then it is taken down globally. 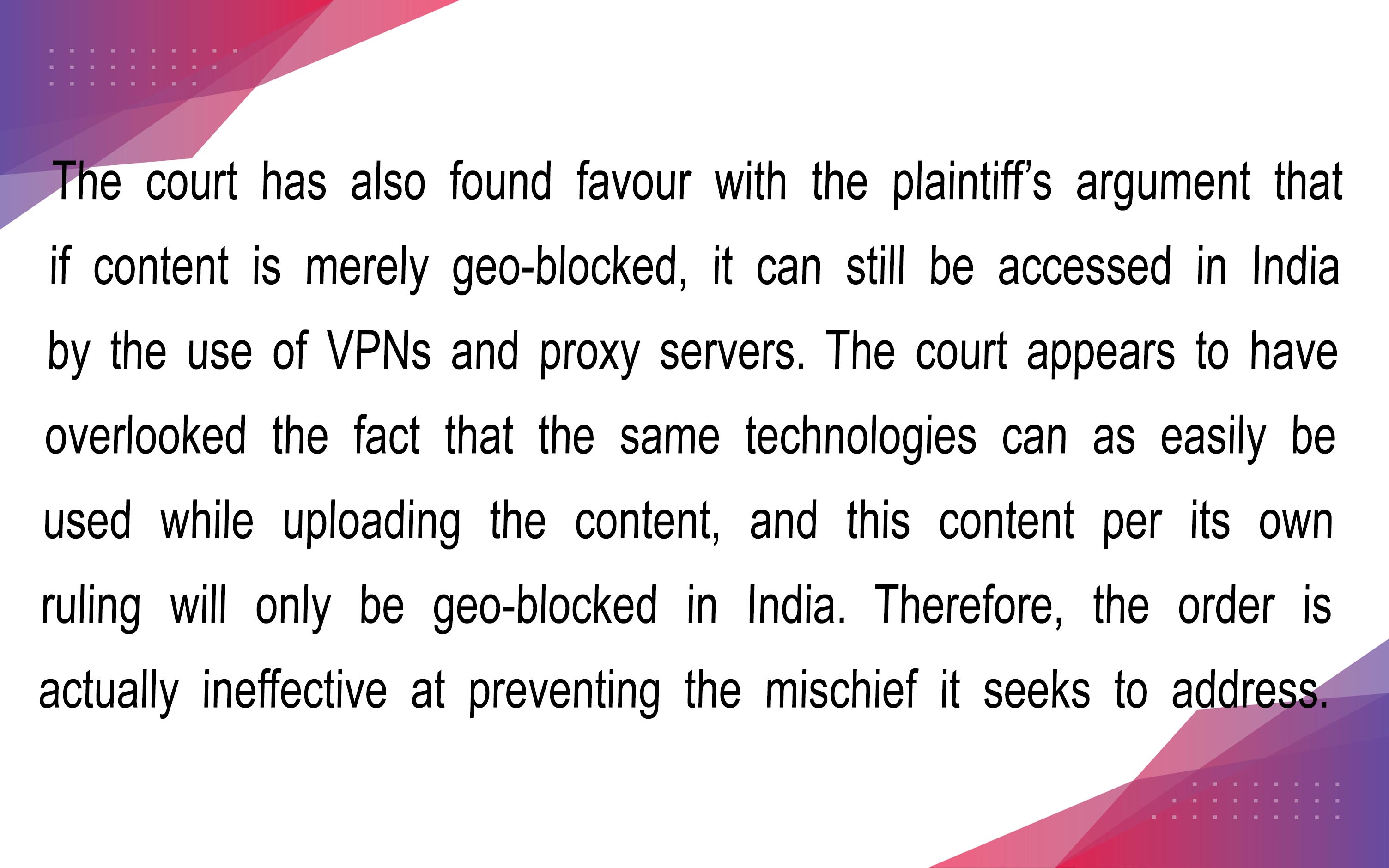 The court concluded that the question before it was whether geo-blocking was justified and sufficient in terms of Section 79 of the Information Technology Act, 2000 (IT Act). Section 79 is the intermediary ‘safe harbour’ provision of the IT Act and it requires intermediaries to expeditiously “remove or disable access” to content when it is brought to their knowledge that a “computer resource” controlled by them is being used to commit an unlawful act. “Computer resource” is defined term in the IT Act and it includes a “computer network” which per the act means the inter-connection of one or more computers. The court performed an extremely literal reading of the provisions of the IT Act and concluded that “if an information or data has been uploaded on a computer
network, the platforms would be bound to remove it and disable it from that
computer network completely” and not from a portion of the network as would be the case with geo-blocking.

The court also held that the act of uploading gives courts at the place where the uploading has taken place jurisdiction to determine the lawfulness of the content. The court used this to conclude that in the case of content uploaded from India, Indian courts could grant global injunction orders. In case of content uploaded outside India, the unlawful act was the dissemination of such content in India and in such a situation, courts could order geo-blocking of the content.

This precedent is troubling. The court seems to suggest that intermediaries will always be able to accurately determine from which geographic location what content has been uploaded. Are intermediaries now required to keep a track on and store the geographic location of users that upload data on their platforms? They may well have to in order to comply with the directions of the court even if they previously did not do so. This also makes it extremely difficult for intermediaries to comply with the timelines within which they have to take down content. Law suits typically list out large numbers of URLs that have to be blocked. In order to comply with the direction of the court, they will have to look into where each individual item was uploaded and then decide whether it should be taken down globally or merely geo-blocked in India. Large players like the ones in this case may well have the resources to comply with such a requirement, but it may prove onerous for start-ups or lean structured organisations like Wikipedia.

The court has also found favour with the plaintiff’s argument that if content is merely geo-blocked, it can still be accessed in India by the use of VPNs and proxy servers. The court appears to have overlooked the fact that the same technologies can as easily be used while uploading the content, and this content per its own ruling will only be geo-blocked in India. Therefore, the order is actually ineffective at preventing the mischief it seeks to address.

Lastly, the court appears to have erred in its interpretation of the provisions of the IT Act. It extensively discussed the words “that material” and “that resource” in Section 79(3) to give effect to its interpretation that the content must be taken down globally as any other interpretation would not give full meaning to these words. Critically however it overlooked the words “the unlawful act” in the same sub-section. Courts in India can only determine the lawfulness of an act within the contours of Indian law. Whether the same content is unlawful in any other jurisdiction is beyond the jurisdiction of Indian courts. If certain content is uploaded from India, is stored in servers in the Bahamas and is downloaded and viewed in Fiji, should an Indian court be deciding the lawfulness of the content on their behalf? I would argue that it should not.

Facebook’s appeal against this decision has been admitted by the court on 31st October 2019. The court will hear arguments on 7th December, 2019. In the meantime, no contempt proceedings can be brought against Facebook for failing to comply with the single judge’s order.